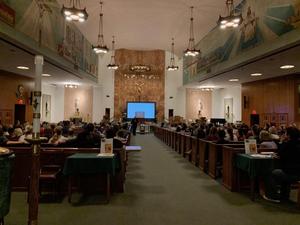 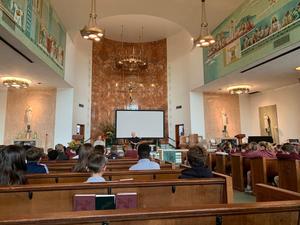 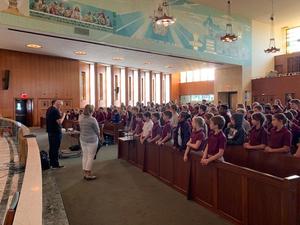 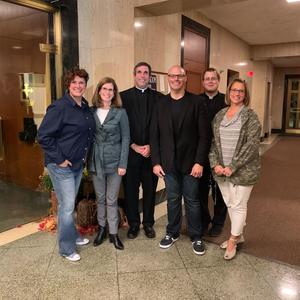 In his October 9 presentation, renowned psychotherapist Roy Petitfils painted a stark picture of teens in trauma today, and offered new parenting solutions.
Award-winning author and Catholic psychotherapist Roy Petitfils entertained, challenged, frightened, and inspired his audience at Christ the King October 9. The premise of his presentation: if you want to raise well-adjusted children, you have to let them fail.

The evening was filled with laughter and somber moments as Petitfils talked about working with teeangers in his home state of Louisiana who are dealing with anxiety and depression. The event, which drew a full house, was sponsored by Christ the King in collaboration with the St. John Fisher/Most Holy Redeemer Youth Ministry program. Earlier in the day, Petitfils met with CK students.

Petitfils began by sharing some disturbing trends to illustrate how adolescents and teenagers are hurting today:

According to Petitfils, children are dealing with record levels of anxiety and stress because of today’s parenting styles. In particular, when adults over parent, rescue their kids, and dangle carrots, they are creating a generation of young people who lack independence and intrinsic motivation.

Diving deeper, he pointed to several factors that are hurting young people today:

Undefined Success—There are other metrics for success besides academic or extracurricular achievement. Students often don’t realize the importance of effort and dedication to reach a goal.

Less Play—Free and unstructured play is a miracle drug for anxiety, Petitfils said. However, most adolescents and teens are tied to electronic devices. They rarely just play.

More Options for Avoidance—When students skip class, fail to do their homework, or avoid studying for a test, their anxiety levels go up. And so does the chance that they will become depressed.

Over Reliance on External Motivators—Dangling carrots, such as money for grades, weakens students’ intrinsic desire to learn.

Lack of Resilience—Young people who don’t learn to take personal responsibility for themselves can be easily traumatized.

Petitfils cited a number of reasons why parents are resistant to changing their behavior. Often, they are just trying to do a better job than their own parents did. Adults who are divorced may be parenting from guilt. Some, especially overprotective mothers, may want to feel needed by their kids. And so on.

He encouraged the audience not to judge themselves, but to try new parenting practices because the prevalent ones are doing more harm than good.

He offered the following remedies for parents who want to change their parenting style.

Petitfils said that students’ problem solving abilities grow exponentially when they feel heard. In most cases, they would rather learn how to fix their own problems rather than have someone swoop in.

“What young people most deeply want,” Petitfils said, “is to be responsible and independent.”

The Gift of Failure by Jessica Lahey

Parenting from the Inside Out by Daniel J. Siegel, M.D., and Mary Hartzell, M.Ed.